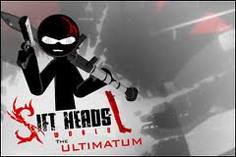 Storyline :
The team is back with an unstoppable fury! As they are being chased by the police they will confront their deadliest rivals, Alonzo and Yuuma. Vinnie, Shorty and Kiro will finally meet their match and their skills will be put to test! Will they survive wave after wave of fierce blows or will they succumb?


Being the most wanted bounty hunter has its disadvantages! Not surprising to have our three characters being chased by the police...